AMY SEDARIS AND A TALE OF TWO BUNNIES

“I have always wanted a bunny and I’ll always have a rabbit the rest of my life,” exclaimed Amy Sedaris on a January afternoon in her cozy, quirky apartment in New York City’s Greenwich Village, which she shares with her pet rabbit Dusty.

Multi-talented Amy has a recurring role on Sex in the City and has appeared in the recent films My Baby’s Daddy, Elf, The School of Rock, Six Days Seven Nights, and Jump Tomorrow, and the network television shows Just Shoot Me, Monk, and Ed. She was a member of the Second City Comedy Troupe, and star of the Comedy Central cult classic Strangers with Candy and Comedy Central’s Exit 57. With her brother, best selling author and National Public Radio humorist David Sedaris, she’s collaborated on eight plays and won an Obie Award and a special citation from the Drama Desk Awards. On stage, she teamed up again with her good friend Sarah Jessica Parker in Wonder of the World, and also had a role in Paul Rudnick’s The Most Fabulous Story Ever Told.

Amy first realized her dream of having a pet bunny when she brought Tattletail into her life. Tattletail was a tiny Netherland Dwarf girl, the smallest rabbit breed, with beautiful black and silver coloring. Amy recalls,” I gave her a character, a personality. I made up a voice for her, and stories about her too.” 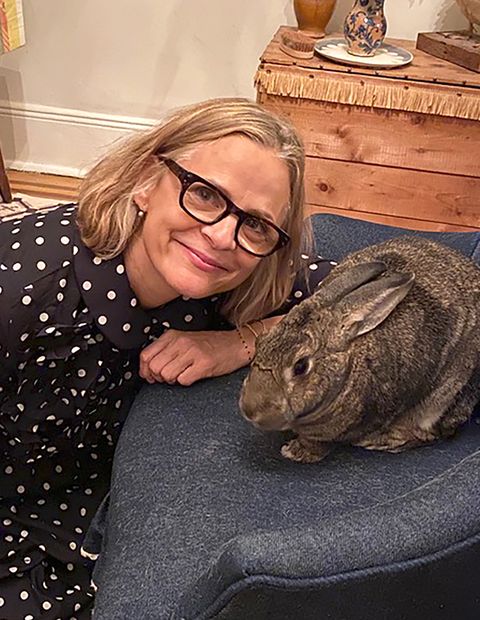 Tattletail was a “free range” bunny, allowed to roam Amy’s home, which is bunny-proofed, of course. Tattletail was litter box trained and spayed. But most of all, she was affectionate. As bunnies do, she would give loving licks to Amy, as if she were grooming another bunny to show affection. She’d also nibble on Amy’s hair, as part of the grooming — love ritual.

Sadly, Tattletail fell ill and passed away after five and a half years. Amy missed her terribly. She even wrote letters to Tattletail after she was gone. Then, one night, Amy had an amazing, comforting dream. “There was green, green grass, like on a golf course. And there was a big tree in the center. And Tattletail was running and leaping around the tree in circles. She was so happy!”

Amy is known for her love of bunnies, which she shares as a frequent guest on both the Conan O’Brien and David Letterman late night shows. But she is also known for her baking skills, especially her cupcakes. And, Tattletail was a part of that, too.Despite her busy schedule, Amy finds time to bake cupcakes, which she donates for sale at fundraising events for a variety of charities. Why cupcakes? “They remind people of childhood. They can be decorated differently. And they look nice together,”

Amy decorates the cupcakes in her own whimsical style – with bunnies, ballerinas, and seasonal designs. Her cupcakes are also available in the West Village at The Original Espresso Bar and the coffee house Joe.

Amy’s cupcake enterprise was first christened “Tattletail Industries.” Amy was the company’s President, and Tattletail was the Vice-President. Tattletail’s duties basically involved looking cute and watching Amy bake. Amy puts a portion of their earnings into a special jar, which she called “Tattletail’s Trust Fund.”

After losing Tattletail, Amy felt that it would be a long time until she was ready to have a new bunny. In the meantime, she became active in the New York City chapter of the House Rabbit Society, also called Rabbit Rescue & Rehab. The organization’s mission is to rescue, rehabilitate, and find permanent homes for abandoned, abused, and neglected rabbits, and educate the general public about rabbit care.

One day, the Chapter Manager, Mary Cotter, called to say that she had the perfect new bunny for Amy. It was a little girl, already spayed and litter trained, about a year and a half old. She was a mini-rex, which is a small breed with plush velvet fur. And, she had beautiful black and white markings, with what looked like a mask on her face, and a starburst on her fluffy tail.

Amy was unsure if she was ready, but, she took the bunny home. “She got to me the second day,” Amy remembered. “I loved her luxurious, glamorous fur.” Amy and her new bunny bonded beautifully. But, it took Amy three weeks to find the perfect name for her. “She has these big clown feet. And when she was lying down, the white fur on the bottoms of her feet looked like the sort of underside of a dust mop. So, I named her Dusty.”

Amy and Dusty have been together since March 2003. Tattletail Industries has changed names, to become Amy’s Cupcakes. And now, Amy makes cheese balls and nut cakes too. But Dusty is truly a trust fund girl, as the contents of the Tattletail Trust Fund jar have provided food, litter, and more for Dusty. Recently, Amy’s Cupcakes brought 100 of the sweet treats to Rabbit Rescue & Rehab’s annual conference, to raise funds. Amy was in character and costume, as a slightly dotty, completely charming 1950’s housewife, behind her cupcake table.

Amy muses, “Sometimes I feel like Dusty is Tattletail in disguise. Somehow, because of Dusty, I feel as if Tattletail’s spirit is still here.” Unlike Tattletail, Dusty doesn’t choose to lick Amy to show her love. But, when she’s petted or cuddled, she grinds her teeth softly, which is how bunnies “purr” with pleasure.

“Nothing makes my day like coming home to her and seeing her run to me and binky,” Amy says with a smile. A “binky” is the rabbit-aficionado word for a spontaneous leap for joy. “I love her appetite. And I love how she always lives in the moment.”

Like Tattletail, Dusty has free reign in Amy’s apartment, with one exception. She’s not allowed in the kitchen, to protect her from the cleaning products stored there, and bar her big appetite from the trashcan. A baby gate blocks the door. But, Dusty has a multi-level “bunny condo” in Amy’s bedroom, designed and built by Amy’s friend, designer Todd Oldham. Dusty can come and go from her condo as she wishes. But she’s also free to snooze under Amy’s bed, or with Amy.

All around the house are lots of sweet and sentimental bunny keepsakes, many handmade by friends. For Dusty, the décor highlights of the living room are her luxe litter box filled with fragrant hay, her polka-dotted water bowl, and treats to chew and toss – fruit tree twigs, balsa wood, and bathroom tissue rolls. The electrical wires in the apartment are covered with plastic tubing, to protect Dusty from a shock, since rabbits like to chew.

Some special touches reveal Amy’s love. A portrait of Tattletail hangs in her living room, on a wall with other heartfelt mementos. The same portrait glows in her bedroom, as a custom made night-light. A slipper chair by her bedside is covered with vintage velvet, printed with running rabbits.

Amy says, “Bunnies teach us lessons in so many ways. They’re always aware and listening. Curious. Smart. Always looking behind them. Street smart! They notice everything… I wonder… why did Dusty and I hook up? I was so afraid to get another bunny. She’s so different from Tattletail. But she has taught me so much, in her own way.

A bunny is a blessing. Try this blessing, as Amy and Sarah Jessica Parker do. On the first day of each month, when you awake, before you say anything else, let the first words from your lips be, Rabbit Rabbit. This is said to bring you good fortune throughout the month. The late Gilda Radner believed in it too, but she said Bunny Bunny. Gilda authored a book with that title.

Waking up with bunny whiskers next to your face, you might want to say it every day. Forget about a lucky rabbit’s foot. Four rabbit feet attached to a beloved pet bunny are the luckiest of all. Like Amy Sedaris, you might say, “I’ll always have a rabbit the rest of my life.”

To adopt a pet rabbit, visit the House Rabbit Society at www.rabbit.org and select your local chapter to see rabbits near you who would love to share your home.