Kevyn Aucoin (2/14/1962 – 5/7/2002) as Sharpei, episode 2-04 “The Goodbye Guy”
Celebrity makeup artist & author of “Making Faces” and “The Art of Make Up”
• FILM: Zoolander, The Intern
• TV: “Sex and the City”
Aucoin, the master makeup artist who worked with many of the world’s biggest celebrities, died on Tuesday, May 7, 2002 at age 40. He died at Westchester Medical Center from complications of a metabolic disorder. He had been treated for a pituitary brain tumor within the previous year. Aucoin, born on Valentine’s Day in 1962, had a lifelong love of makeup. During his youth in Lafayette, La., Aucoin would rip out photos from magazines and try to replicate the models’ makeup on his sisters. He moved to New York in January 1983 and spent his time making up models for free. His big break came eight months later, when Vogue magazine booked him to work on a photo shoot of Meg Tilly. He did his first cover in 1986, working with Richard Avedon. Aucoin was the author of three books, “Face Forward”, featuring Amy Sedaris as Angie Dickinson’s Police Woman, “Making Faces”, and “The Art of Makeup”. He was also an activist, remembered as an opinionated person with strong political views who was outspoken about gay rights. www.kevynaucoin.com 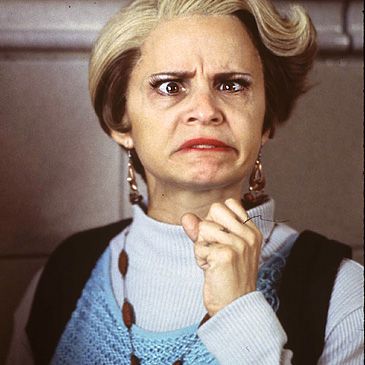 Dylan Baker as Minister Arsenew, episode 3-02 “Is Freedom Free?”
• FILM: Spider-Man II, How to Deal, Head of State, Road to Perdition, Changing Lanes, The Laramie Project, A Gentleman’s Game, Along Came a Spider, The Cell, Thirteen Days, Random Hearts, Celebrity, Happiness, Simply Irresistible, Life With Mikey, Disclosure, Radioland Murders, The Last of the Mohicans, Love Potion No. 9, Delirious, The Wizard of Loneliness, Planes Trains & Automobiles
• TV: The Elizabeth Smart Story, “The Pitts”, “Benjamin Franklin” (mini), “CSI: Crime Scene Investigation”, “Big Apple”, “The Practice”, “Oz”, “Feds”, “Murder One”, “Law & Order”, “Northern Exposure”, “Spenser: For Hire”
Dylan Baker was born on October 7, 1959 in Syracuse, New York. He is married to actress Becky Ann Baker (nee Gelke). He attended William and Mary College in Williamburg, Virginia. He appears in a non-speaking role as an arresting officer in a United States Postal Service training film, apparently made sometime in the 1980s, warning of the dangers of mail theft. The film, narrated by a characteristically grim Edward James Olmos in his “Lieutenant Castillo” mode, is entitled “Was It Worth It?” (you can probably guess the answer) and is still being shown to new USPS employees.