On this “painfully special” episode of Strangers With Candy:

While hanging with Orlando and playing “Presidential Assassin” at the video arcade before school, Jerri meets a smiling flower-bearing cult member. Orlando tries to warn Jerri about those people, but to no avail. That morning, Principal Blackman warns the student body of the threat of the Safe Trap cult that recently came to Flatpoint. When Jerri gets home she discovers that Derrick and Sara are taking a family trip to Good Time Island without her. A couple of students at school had shunned her attempts to make weekend plans with them and even Orlando would be too busy helping his uncle stock their church with water and firearms. Jerri decides to go to the shopping mall and drop cups full of soda and ice on people below.

She meets up with the same cult member again and she (Rebecca) invites Jerri to come with her and her friends. They walk out to a van in the parking lot where Jerri is hoping to have “Beck” all to herself, but when the back of the van is opened Jerri is greeted with a big “Hallelujah” and a chorus of “I’m Gonna Sit at the Welcome Table”. Jerri is brought to the Safe Trap House, but doesn’t know exactly where it is, perhaps the blindfold and the sleeping pills have something to do with that. Inside Jerri is surrounded by yellow-clad smiling zombies who offer her love and attention. The next morning at breakfast Jerri meets “Father, our father”, the leader of the cult. When she sees how bland their lives are, and after listening to “I’m Gonna Sit at the Welcome Table” for the umpteenth time, Jerri decides to leave. 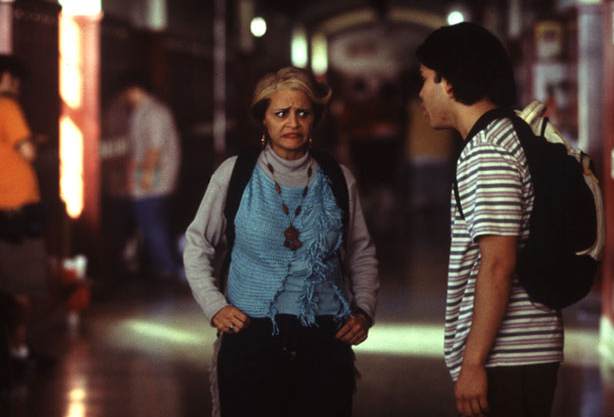 Father tells her that she’s free to go, but when she gets to the door and tries to turn the knob she says that she can’t open the door. Father acts as though she has stated that she can’t bring herself to leave because she wants to stay. But the truth is that she just can’t open the locked door. Father tries to win Jerri over by telling her that she’s beautiful. These are words that Jerri isn’t used to hearing, especially lately. Jerri is allowed to make a phone call to a loved one to tell them that she’s all right and that she won’t be coming home… ever.

She tries to call home, but a distraught Sara keeps hanging up the phone each time it rings. Sara is basking in her motherly concern and being comforted by Derrick. Jerri decides to give Orlando a try, and when she tells him that she’s at Safe Trap House he tells her that she’s got to get away from them. But before you can say “Heaven’s Gate” Jerri is at the mall selling flowers. Orlando sees her there and tries to speak with her. She tells him that Jerri is dead and that her name is “Sycamore”. Orlando drops to his knees and screams, “Nooooooo!!!”. Jerri, riding up the escalator, quietly responds, “Yes.” [to be continued…]