Comedy’s Antidote for a Sitcom-Saturated Age 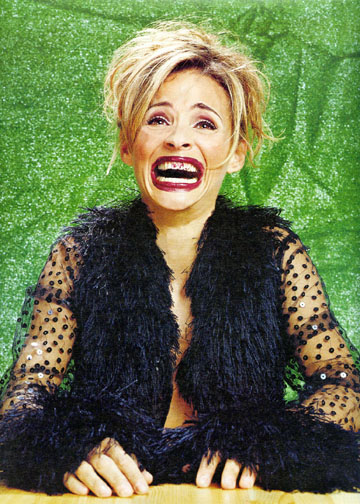 If Amy Sedaris isn’t the funniest woman alive (and she may well be), then she is, at the very least, one of the 10 very funniest people alive. Native of North Carolina, veteran of Chicago’s Second City improvisational troupe, star and co-creator of Comedy Central’s cult hit Strangers With Candy, she is also sister to the brilliant writer David Sedaris, with whom she is currently mounting The Book of Liz, their seventh play together In New York (through May 5 at The Greenwich House Theater). In the interest of full disclosure I must confess I have a years-long association with Ms. Sedaris, having been her director (in Stitches), and having acted with her in three plays: One Woman Shoe, The Little Frieda Mysteries and the current Sedaris show.

DAVID RAKOFF: Tell me about The Book of Liz.
AMY SEDARIS: It explores the Buddhist principle of idiot compassion. Like when someone’s drowning and you try to save them, knowing that you could drown, too.

DR: This is your seventh show with David. What’s it like having a brother with whom you’re so close professionally?
AS: Actually, growing up I was closer to my younger brother and sister. My relationship with David changed when I moved to Chicago and we started working together. I remember calling him once with a problem and he was so happy that I had one-he said, “Oh good, you’re so lucky.” I mean, that’s how he treated it. And now, whenever I’m worried about something I think about David’s attitude.

DR: This show is somewhat different than others you’ve done with him because David now lives in Paris.
AS: When David lived here he’d come over, we’d spend like three months talking about a project, and this time, with him in France, he pretty much came up with the idea, and then let me in-corporate whatever ideas I had.

DR: Where did you grow up?
AS: North Carolina, then I moved to Chicago, and now I’m here in New York.

DR: And before that?
AS: I lived in North Carolina where I waitressed and parked cars. Then David moved to Chicago and he kept saying, “You gotta move here. There’s this thing called Second City.” So I did.

DR: Weren’t you also offered a spot on Saturday Night Live?
AS: Well, when Janeane Garofalo was leaving the show [in 1995] I met with Lorne Michaels, but at that time we were doing our play One Woman Shoe, and it was everything I wanted.

DR: A lot of people would say it was crazy not to take Saturday Night Live.
AS: Oh, I know. Maybe even three years earlier it would have been great, but at that point it was like, Oh, it’s too late. A few years later Strangers with Candy fell into my lap. But television’s not something that I ever thought about or planned.

DR: Of course, when we walk down the street now people recognize you from the show.
AS: Yeah, sometimes. [mimicking a fan] “Hey. You’re so ugly on that show!”

DR: Well, it’s interesting because in real life you’re not just pretty, you’re lovely. I often wonder if people know this.
AS: Mm-hmm. Did you see this boil I have?

DR: What is that on your eyebrow? I’m sure it’s a really good thing to run your finger-nail over it all the time. [pause] What are you doing?
AS: I’m smelling my coat.

DR: Why?
AS: I smell like Tattle Tail, my rabbit. God, that’s exactly what this coat smells like-disgusting!

DR: Tell us about Tattle Tail.
AS: She just turned five and she’s really fat right now. I’ve got to put her on a crash diet.

DR: Not a crash diet ’cause she won’t keep the weight off. [both laugh] She’ll just yo-yo. So what are your plans after this play?
AS: Paul [Dinello] and Steve [Colbert, co-writers of Strangers With Candy] and I are working on a photography book for Hyperion. And we want to do a screenplay of Robert Plunket’s book Love Junkie.

DR: What would your fantasy life be?
AS: Selling cupcakes and cheese balls and stuff, a little independent movie here and there that wouldn’t involve more than two or three days.

DR: Are you less hungry than you used to be?
AS: Maybe. I mean, I’m not striving for some big movie career. I’m just aiming to continue doing these plays and perform in front of a live audience.

DR: Do you think of yourself as funny?
AS: I think I have a sense of humor, but I wouldn’t say I’m funny anymore than I’d say I’m an ac-tress. I don’t know what you’d call what I do – I like to perform.

DR: I have this theory that being funny is very different from having a sense of hu-mor, yet you manage to merge the two.
AS: Maybe it’s a defense thing, but I always search to find what makes me laugh about any situation.

David Rakoff’s Fraud is due out this month from Doubleday. Below: Amy Sedaris takes a star turn. Hair: JIM CRAWFORD at Garren, NYC. Makeup: SCOTT McMAHAN.